Veterans and the internet: a growing community

What does the rise in social media mean for a new generation of veterans and the organizations that serve them? This story was published in all nine Straus newspapers on June 16 and 17, 2011.

Jimmy Thonus is home in Pearl River, NY, after serving three seven-month deployments as a Marine in Iraq. He belongs to two veterans’ organizations – the Veterans of Foreign Wars and the Iraq and Afghanistan Veterans of America – but he doesn’t have much to do
with either. Although he hates computers, it’s through Facebook that he keeps in touch with his fellow Marines.

“I guess technically I’m part of a post. I’ve never actually been to it,” said Thonus, 25, whose grandfather signed him up for the VFW. “I’ve stopped into a couple VFWs and had a couple beers with some of the older guys but I really don’t have time to go to the post in between work and all the other stuff.”

The VFW, which peaked in 1992 with 2.2 million members, is down to 1.5 million members, although it remains one of the largest veterans’ organizations in existence. “We know young folks these days have very little discretionary time, especially with both spouses working,” said Joe Davis, a spokesperson for the VFW. “They can become actively involved later in life when they have more discretionary time. Having your name in that membership roll keeps the doors of Congress open.” The American Legion has seen a similar decline in its membership from 3 million in 1990 to 2.4 million today.

Practically everyone Brandon Friedman met during his two-year deployment in Afghanistan and Iraq was on Facebook or Twitter. Friedman, 33, is now the director of online communications for the Department of Veterans Affairs.

Of the 153 VA medical centers nationwide, 86 now have a Facebook page and 47 have a Twitter feed. These tools are “a great asset to the veterans’ community, but I still maintain that there’s no substitute for face to face interaction among veterans,” Friedman said. “It will be interesting to see if veterans don’t make the effort to reach out to each other and talk to each other and meet each other in person because they have access to social media. That’s something that I watch really closely.”

The Iraq and Afghanistan Veterans of America, which serves 95,000 veterans of those two wars, harnessed social media from the start. “Online was the first place we were,” said Chrissy Stevens, a spokesperson for the IAVA. “It was a big tool in 2004 when we got started to reach people because we were on a limited budget.”

“A lot of people when they’re deployed now, they stay in touch with folks back home through Facebook,” said Stevens. “Troops come back and they continue that same form of communication.”

The IAVA created Community of Veterans, a social media site exclusively for veterans of Iraq and Afghanistan. Last year the site’s membership grew 243 percent to 15,000 users. A big distinction between the IAVA and other veterans’ organizations is that it does not maintain local chapters or posts. This is perhaps the strongest signal that physical communities are being supplanted by digital ones.

John Raughter, a spokesperson for the American Legion, isn’t worried about online interaction replacing the physical variety, even though the majority of his organization’s members are Vietnam-era or older. Raughter pointed to a 1971 Wall Street Journal article that predicted the demise of the American Legion because it alienated Vietnam veterans. “Today, they’re the largest segment of Legion membership,” said Raughter. “Reports of our demise have been greatly exaggerated and premature.” 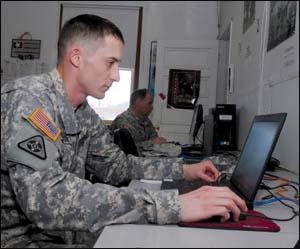 The need for community

Like Vietnam veterans, soldiers who fought in Iraq and Afghanistan face a unique challenge upon their return home. The current ten-year conflict has two fronts and an entirely volunteer military, which can make it easy to take an attitude of ambivalence towards the wars or ignore them altogether.

“The whole nation has not been involved,” said Dr. Matthew Friedman, director of the National Center for Post Traumatic Stress Disorder (no relation to Brandon Friedman). “In many ways I think the people who have fought in Afghanistan, Iraq, and contiguous areas are not representative of society in general.”

“In rural areas this problem is particularly compounded because there may not be another person within five miles that was deployed or understands these issues,” said Freidman. Social media can help fill that gap by enabling veterans to keep in touch without having to travel, he said.

Raughter of the American Legion wishes more veterans from Iraq and Afghanistan knew about the Legion’s advocacy work in Washington, like the role the organization played in the passage of the new G.I. bill. But while to some degree membership is tied to the amount of clout in Washington, the pedigree of both organizations is well established in Congress. Davis of the VFW said that even though the organization’s membership will decline, the advocacy they do on behalf of veterans and soldiers will go on.

“It doesn’t mean our mission in Washington becomes any less important,” said Davis. “We’re going to keep working no matter what.”

This story was originally published in an alternative story form with supplementary graphics. To download a PDF of this story as it appears in print, click here.

Staff writer for the Manhattan weeklies Our Town, Our Town Downtown and the West Side Spirit.
View all posts by Daniel Fitzsimmons →
This entry was posted in News. Bookmark the permalink.

1 Response to Veterans and the internet: a growing community