Fighting for the Soul of Washington Square Park

Posted on January 8, 2014 by Daniel Fitzsimmons

Fans of one of the city’s most iconic parks are concerned that a newly created Washington Square Park Conservancy will exert undue private control over a public space known for its laid-back, gritty atmosphere.

People who flock to Washington Square Park do so to revel in the pocket of nature in the West Village, for sure, but also to watch unlicensed street performers, take a snooze on a shady bench, engage in people-watching of the most varied order and sometimes sneak sips from brown paper bags or follow plumes of sweet-smelling white smoke. It’s a park for students, drifters, skateboarders, tourists and New Yorkers of all stripes, and many want to keep it that way.

Historically, when conservancies pop up for NYC parks, the results can be beneficial, but also bring some complaints. A 2010 report by Harvard Law School said that private groups participate in the management of half of the city’s 1,700 public parks.

According to the study, “This ‘privatization’ has generated criticism. The manager of Central Park, for example, was severely criticized for refusing to allow a protest during the Republican National Convention, and instead protecting the grass of the Great Lawn. Bryant Park’s management similarly has been criticized for commercializing its park by hosting fashion shows to raise revenue.”

Such conservancies have also been praised as protectors and preservers of public space.

“Historians have hailed the Central Park Conservancy, for example, as the long-awaited ‘protector’ of the park, and the Wall Street Journal has complimented the renovated Bryant Park as the most ‘urbane’ space in the city.”

The study says that critics of public space being privately controlled often say conservancies and the like become unresponsive to community needs as they relate to public space, but the study takes the position that frequently, government agencies, like the parks department, are just as unresponsive to such needs. 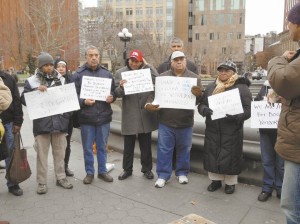 Hot dog vendors stage a rally in Washington Square Park on Dec. 8 protesting the city’s decision to not renew their vending licenses

According to Cathryn Swan, who runs the Washington Square Park Blog, the founding members of this new conservancy presented their plans to the community as a benign organization seeking to simply spruce up the park. The reality, she claims, is something different.

“They basically forced, in my opinion, the same model onto Washington Square Park that occurs at all these other parks but tried to camouflage it as these four nice women who just wanted to form a friends group,” said Swan. “But when you look at the 501c3, they’re not the documents of a little friends group.”

Swan’s referring to the non-profit application the conservancy filed with the IRS, which projects fundraising revenue in the hundreds-of-thousands of dollars in the coming years and includes the ability to award an up to $25,000 bonus for its executive director, who is a parks department employee.

The conservancy’s bylaws, which were made available to The Villager newspaper and posted on their website, calls for a board of anywhere between three and 25 members who will vote on a wide range of initiatives at the park. The conservancy’s executive director is Sarah Neilson, the parks department’s administrator for Washington Square Park.

Swan said the community has resisted pressure to form a conservancy at Washington Square Park for the past 12 years, but that this attempt was successful because of the way it was presented to residents and the community board by the four founding members.

“They may in their minds think they’re insuring the future of Washington Square Park,” said Swan, “but they also have to know what subsequently comes with those conservancies, which is there’s always more commercialization and privatization and private money gets to influence what happens at those parks.”

However, Swan recently obtained emails through a freedom of information request that showed the conservancy’s Evans, in an email to Neilson, saying, “We look forward to agreeing [to] a license agreement with the City. […] We will make sure that the [conservancy’s] bylaws are changed before the license agreement is executed so that should not be a concern.”

In an interview with the Villager, the conservancy’s Ely said Evans’ email to the parks department was a joke and taken out of context. Neither Ely nor any other conservancy members responded to requests for comment from Our Town Downtown.

Swan points to another sign of what she considers the conservancy changing the nature of the park – the city recently decided not to renew licenses for two hot dog vendors that expired at the end of December. Critics of the decision believe it was really made by the conservancy in an effort to attract more cultured – and pricier – food options to the park.

Like Swan, Croft believes the conservancy could eventually have real power over Washington Square Park backed by its fundraising efforts.

“I don’t think anyone is against people helping out, as long as that’s what it is,” said Croft. “But generally people don’t get into this without wanting some degree of decision making power.”

Staff writer for the Manhattan weeklies Our Town, Our Town Downtown and the West Side Spirit.
View all posts by Daniel Fitzsimmons →
This entry was posted in News and tagged Cathryn Swan, Washington Square Park. Bookmark the permalink.