Posted on August 19, 2015 by Daniel Fitzsimmons

By Daniel Fitzsimmons and Logan Hendrix

Universal pre-kindergarten sites across Manhattan have outstanding and serious health violations, according to Health Department data. City Hall maintains that every site is safe for the start of school. This story was published Aug. 19, 2015 in Our Town.

Next month, 70,000 New York City school kids will show up for their first day of pre-kindergarten, taking advantage of the signature policy initiative of Mayor Bill de Blasio’s first term in office.

So far, 1,150 early education centers have been set up to house all of those kids. And last week, de Blasio’s office gave the green light to all of them, saying that any health violations or Department of Building concerns have been resolved.

But data collected from the Department of Health’s own website suggests that not every site is ready to receive children.

In neighborhoods throughout Manhattan, inspection reports reviewed by this newspaper reveal there are still many unresolved and serious health code violations at a half-dozen universal pre-K centers. A spokesman for the mayor’s office said despite what is reflected in the Health Department’s database, the administration stands by its claim that there are zero unresolved health violations in the most serious category at any UPK site.

“They can stay listed on our online site until such time as we’ve complete the procedural paperwork and resolution of that violation,” said de Blasio spokesperson Wiley Norvell. “But regardless of whether they’re listed on the site currently, we’ve confirmed that all the violations have been mitigated on the spot.”

But for parents about to send their 4-year-olds to their first day of school, the fact that several of the schools are still showing up as in violation could be unnerving, despite the city’s reassurances. Indeed, on Aug. 13, the day the mayor’s office announced that all priority violations at universal pre-K centers had been addressed, inspectors were out finding new violations. 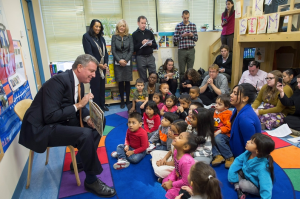 In the most serious category, violations cover conditions that may present an imminent threat to the health and safety of children, and can include infractions for things like failing to maintain constant and competent supervision of children, failing to report alleged child abuse or perform background checks on employees, or failure to properly store flammable liquids or toxic substances, among other serious offenses.

On the Upper West Side, St. Gregory the Great Preschool on West 90th Street was inspected in February and was found to have three public health hazards, which remain open, according to data on Child Care Connect. Two of those serious violations include failure to provide adequate potable water and failure to maintain the building in a safe matter, as well as the presence of pests and hazardous conditions.

In Lower Manhattan, the Hamilton Madison Swing Space on Catherine Street was hit with a public health hazard violation after an inspector observed adulterated food being served on Aug. 13, the same day de Blasio touted his claim that all priority health violations had been addressed. According to the DOH database, that violation remains unresolved.

Another inspection on Aug. 13 found that the Educational Alliance Head Start at P.S. 142 on the Lower East Side had fire extinguishers that were not inspected or maintained, a public health hazard violation that remains open, according to the Child Care Connect database.

Two preschools in the East Village have unresolved public health hazard violations. According to an inspection report from January of St. Brigid Preschool on East 7th Street, the owner or manager of the building failed to maintain its structural integrity. The report also notes the presence of pests, nuisances and hazards, and is equipped with inadequate heat ventilation and lighting.

More recently, the Virginia Day Nursery on East 10th Street underwent an inspection on Aug. 7 that found the school failed to arrange and conduct background checks for required individuals, and failed to re-clear individuals after two years. Both public health hazard violations at St. Brigid and Virginia Day remain unresolved, according to the Child Care Connect database.

In total, this newspaper found eight unresolved health hazard violations in six schools. Three of those violations came from preschools that have contracts with the NYC Administration for Children’s Services to provide subsidized childcare: Virginia Day Nursery in the East Village, the Educational Alliance Head Start at P.S. 142 on the Lower East Side, and Hamilton Madison Swing Space in Lower Manhattan.

In Chelsea, the Sacred Heart of Jesus Preschool on West 52nd Street currently has an open public health hazard violation from an inspection in late-April for failing to maintain the building in a safe manner, failing to maintain the structural integrity of the building, the presence of pests, inadequate heat ventilation and lighting, and the presence of nuisances and hazards at the time of inspection.

The next level of violation, below the public health hazard violation, are deemed “critical,” and require correction within two weeks. These can include everything from child care staff using “unacceptable forms of discipline” to a lack of signage for exits, according to the city’s health code.

At Hamilton Madison Swing Space in Lower Manhattan, for instance, there are currently three unresolved critical violations for things such as a lack of running water or water that exceeded 115 degrees Fahrenheit, a lack of storage areas for children’s outer garments and a lack of signage for points of egress.

At the St. Brigid School in the East Village, one of two unresolved critical violations from an inspection on Aug. 7 was for staff being allowed to perform their duties while unhealthy or incapable.

The least pressing category is a general or minor violation, which covers offenses such as unclean conditions and child care staff caring for children while unhealthy.

When presented with the data, Norvell said in some cases schools contest their violation status, which is maintained on the city’s database until it has been adjudicated. Norvell reinforced the administration’s stance that all priority health violations have been dealt with, and that if any universal pre-K site has an outstanding public health hazard they will be prevented from opening on the first day of school.

But in touting its claim that the most serious of violations have been cleared up three weeks before the school year starts, the mayor’s office urged parents to review their program’s health and safety history, which as of Monday, included many serious violations that appear to be unresolved.

As of Monday, Aug. 17, the eight public health hazard violations mentioned above remain open and require re-inspection, according to the Child Care Connect database. Norvell said in the case of St. Gregory the Great Preschool on the Upper West Side and St. Brigid, the violations have been fully resolved in the field and will be reflected in the database on its next update.

Donna Gabella, the principal of St. Gregory the Great Preschool, confirmed the violations were resolved.

“They have been resolved, yes,” said Gabella. “I know I have been working very closely with the Dept. of Education to address any issues, and that’s been going on all summer.”

Norvell aalso said the language of health code violations often sounds ominous, but is often less so in reality. For instance, when it was found at St. Gregory that “at the time of inspection, it was determined that [an] individual associated with child care service….[was] involved in an act detrimental to health and safety,” in reality, a child care worker left a bottle of cleaning fluid on the counter, according to case notes.

In another example of ominous-sounding violations being less than perilous, Fran Davies, the Associate Superintendent for Communications with the Archdiocese of New York, attributed the public health hazard violation at Sacred Heart of Jesus Christ Preschool in Chelsea to a burned out lightbulb.

“What we’re discussing here at Sacred Heart is basically a light bulb that had burned out in an exit sign that was found in an April general annual [Dept. of Health] inspection,” said Davies. “It has been repaired, and the inspector is now confirming that repair was made within a week if its reporting.”

Norvell also confirmed that the violation at Sacred Heart had been resolved.

An official at Hamilton-Madison House, which is in temporary quarters at 80 Catherine St., said administrators had addressed shortcomings – improper food service being the most serious – cited by the Health Department.

“We sent a corrective action plan sent to the Department of Health immediately,” said Vicki Mehmel, director of facilities, purchasing and contract management with Hamilton-Madison. “We make an effort to correct violations, no matter how small.”

Mehmel said the deficiencies were mostly attributable to the temporary space the program was occupying. The Hamilton-Madison program is moving back to its permanent space, at 60 Catherine, within a few weeks, once gas-line work at its NYCHA facility is complete, she said.

“We corrected every violation that was under our control,” she said.

A person answering the phone at Virginia Day Nursery in the East Village, which city records noted had failed to arrange and conduct criminal background clearance checks for certain required staff, among other violations, said she was not authorized to speak with the media. The person said she would forward a message to a public relations official.

No one answered the phone at the Educational Alliance on Attorney Street.

Norvell said in the cases of Virginia Day Nursery, Hamilton Madison Swing Space and Educational Alliance Head Start at P.S. 142, those violations occurred during inspections immediately prior to or after the mayor’s office announced all priority health violations had been addressed.

“We have inspectors in the field every day continually monitoring sites, and will continue repeated inspections through the first day of school and throughout the year,” said Norvell, who noted at the Aug. 13 press briefing, city officials raised the possibility of health violations being found in the immediate weeks leading up to the start of school. “That’s the nature of enforcement, it’s an ongoing and constant process,” he said. Norvell added that for violations where it was found that background checks had not been completed as required, such as at Virginia Day Nursery, the staff members in question are put on leave until the checks are carried out.

This report examined inspection data on the Dept. of Health and Mental Hygiene’s Child Care Connect website for private early education centers that were approved for universal pre-K. These reports cover both full- and half-day programs that have received UPK permits from the Dept. of Education. The Dept. of Education is also partnering with 700 public schools to provide space for UPK students, but any health code violations at those sites are not examined here.

Staff writer for the Manhattan weeklies Our Town, Our Town Downtown and the West Side Spirit.
View all posts by Daniel Fitzsimmons →
This entry was posted in Misc.. Bookmark the permalink.