Posted on February 14, 2016 by Daniel Fitzsimmons

Tenants say a gas shut-off is the latest in an ongoing building battle with landlord. This story was published in the Chelsea News on Jan. 14, 2016.

Cooking gas service has been restored at a rent stabilized apartment building in Chelsea after a nearly three-month outage, and after inquires were made to Con Edison by this newspaper and Councilmember Corey Johnson’s office.

But residents still fear a continuation of service disruptions and other issues dating back to 2014 amid tensions between tenants and management at the building.

Multiple residents confirmed to this newspaper that between April and November of 2014 the entire building – comprising 246 units, about 205 of which are rent stabilized – was without cooking gas. Then on Oct. 20 of last year another service disruption occurred affecting 18-25 mostly rent stabilized apartments, which extended through Thanksgiving and Christmas.

“[Management] suggested that in the meantime, since the Thanksgiving holiday was coming, I should knock on the door of a neighbor and ask to use their stove if I need to cook something,” said resident Franco Gulli, who has lived in a rent stabilized studio at 220 W. 24th St. since 2002. He contacted the building’s superintendent soon after the outage in October began.

Gulli said he was fearful that the most recent outage would turn into another eight-month ordeal like the one in 2014, and that in both cases management at the building had declined to get specific about why the gas was shut off or when it would return.

Calls and emails to the building’s owner, Atlas Capital Group, went unreturned. During the 2014 outage the building was owned by Dermot Realty Management, but the on-site manager, Joel Ornstein, remained in charge of the building after it changed hands. Ornstein did not return a request for comment. 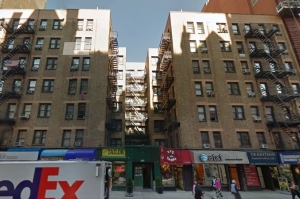 220 West 24th Street, which had its gas restored after an inquiry by the Chelsea News, ending a months-long outage.

Residents, many of whom spoke on condition of anonymity for fear of retribution, said during both outages that management provided hot plates to replace their stoves, but in many cases the appliances were in poor working condition. Residents also said notices went up about the cooking gas outages in 2014 and 2015 but details were hard to come by.

“I just got no answers from anyone,” said a resident named Joe who asked that his last name not be published. He’s lived in a rent stabilized apartment at the building since 1989, and noted that renovations of previously rent stabilized units in the building have been ongoing for a number of years.

Gulli estimated there are currently about 40 market rate units in the building. He doesn’t know for sure if the outages or their prolonged nature are related to any attempt to encourage stabilized tenants to move out, but, “I tend to think it is,” he said.

“There’s an overall feeling of harassment, the last time we had a tenants meeting we were videotaped,” said Joe, who noted one of the doormen brought a handheld video recorder and used it at a meeting called by tenants.

Another tenant who helped organize the meeting but did not wish to be identified said management initially refused to let tenants use the building’s lobby for the meeting. Management eventually relented, said the tenant, but as an act of retribution, she believes, videotaped the meeting. That tenant, however, said the bar for proving tenant harassment is high and that market rate units in the building were also affected by both gas outages. Nevertheless, she said she’s urging neighbors to document interactions with management that appear to be unfair.

Public records show that Atlas Capital Group bought the property, which also has an address of 225 West 23rd Street, in August of last year for $72.9 million. Deed documents list Andrew B. Cohen and Jeffrey Goldberger as the principals at Atlas who completed the transaction. Calls and emails to Goldberger went unreturned. Cohen could not be reached for comment.

In response to the complaints, this newspaper reached out to Johnson’s office, which contacted Con Edison on Friday for a status update on the outages at the building. Gulli said he was told by the building’s manager, Ornstein, that due to the recent holidays service requests at Con Edison were backed up and that the soonest service would be returned to the building was next week. By Sunday, however, cooking gas service was mostly restored, though one tenant reported his apartment was still without cooking gas.

Con Edison could not be reached for comment on this story. Tenants who contacted the company said they refused to discuss gas issues in the building with anyone other than management. When Johnson’s office called, however, a status update was provided to the council member’s team and forwarded on to this newspaper.

Con Edison told Johnson’s office that the most recent outage occurred because of a leak in an overhead pipe in the cellar of the building. Details about the 2014 outage could not be obtained.

Johnson’s chief of staff, Erik Bottcher, said Johnson’s office will be holding a meeting with tenants next week, “to take a comprehensive look at all the issues they’re facing and strategize on how to address each one of them,” he said.

These issues include a new construction rider tenants said are attached to lease renewals and appear to indemnify Atlas Capital Group from any liability in connection with past or future renovation work in the building. Gulli, who provided a copy of the rider to the Chelsea News, said he forwarded it on to the NYS Attorney General’s Office for review and doesn’t believe it’s enforceable.

Johnson’s office also said that according to Con Edison, management at 220 West 24th Street made a service request in mid-November, weeks after the Oct. 20 shutoff. The gap between the shutoff and the request for service gave Gulli pause.

“They cut our gas off Oct. 20,” he said. “Why would it take so long to submit the request from building management?”

There’s also the question of whether tenants are entitled to a rent reduction due to the decrease in cooking gas service. Atlas did offer a five percent rent reduction after the 8-month outage in 2014, according to residents, but those same residents believe the reduction did not adequately make up for the loss of cooking gas for two-thirds of a year.

“A five percent reduction in rent hardly cuts it,” said one rent stabilized tenant in an email last week before the cooking gas service was restored. “I checked my food costs and I spent over [three times] what I normally spend when I have gas. This far exceeds my budget.”

The tenant added that despite the outages she renewed her lease because she couldn’t find a comparable studio apartment in Chelsea at the same price without paying a broker’s fee, which she could not afford.

“This has me at my wits end. I feel like I am on the verge of a breakdown,” said the tenant. “Between not having gas and the financial burden it imposes, it’s just too much for me.”

One market rate tenant who left the building due to the gas outage in October said the hot plate she was supplied with was outdated and she was “wary to even plug it in.”

“When I left there was another notice that the gas would be out for at least another 30 days,” said the former tenant. “I called 311 twice and I don’t even know if it did anything.”

The former tenant said she wrote Atlas Capital Group a letter requesting a rent abatement for the decrease in services, “and it was never answered and no abatement was given. I spent a substantial amount of extra money on ordering out or buying ready-made food. Money I didn’t exactly have to spend.”

The tenant who preferred to be called by his first name, Joe, said there’s a feeling in the building that relations between tenants and management will only deteriorate further.

“I certainly have a feeling that this is just the beginning, and things are about to get worse, and all of my neighbors have the same kind of feeling when we get together,” he said.

Staff writer for the Manhattan weeklies Our Town, Our Town Downtown and the West Side Spirit.
View all posts by Daniel Fitzsimmons →
This entry was posted in Misc.. Bookmark the permalink.